South Bend, Indiana – Patent lawyers for NIBCO, Inc., of Elkhart, IN, have filed a patent infringement suit alleging ERICO International Corporation of Solon, OH, has infringed the following patents issued by the U.S. Patent Office: Patent Nos. 6,517,030,. 6,953,174, 7,191,987, and. 7,441,730. All four patents have the same title, SWAY BRACE FITTING, which is a device for “bracing pipes and other loads, suspended below ceilings and beams, against sway and seismic disturbances.” 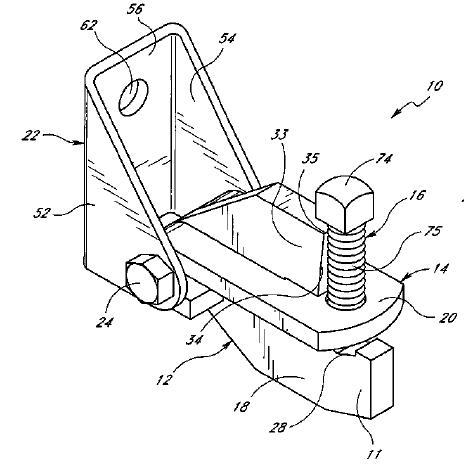 The plaintiff is a manufacturer of support system products. Citing photographs and an advertisement, the complaint states that the defendant is making, using, selling, offering for sale, or importing sway brace products which infringe these patents. As is usually the case in intellectual property litigation, the plaintiff seeks both damages and injunctive relief.

This case has been assigned to Judge Robert Miller, Jr and Magistrate Judge Christopher A. Nuechterlein in the Northern District of Indiana, and assigned case no. 3:10-cv-00524-RLM-CAN.

Practice Tip: To obtain the broadest protection possible, it is common to obtain multiple patents on very similar invention. Here, the NIBCO’s original patent application was filed on April 28, 1999, and it led to a series of patents issued in 2001, 2003, 2005, 2007 and 2008. The practice of continually filing patent applications based on an earlier application allows an inventor to refine the scope of patent protection to hopefully cover a version that is ultimately developed by a competitor. Although NIBCO has five patents based on its original application, it only asserts infringement of four of those patents in this suit.

The complaint makes only a bare-bones allegation of facts “upon information and belief” to support personal jurisdiction and willfulness. In view of the rulings in Twombly 127 S. Ct. 1955, 1969 (2007) and Iqbal which require heightened pleadings standards, the complaint could be subject to dismissal or transfer, and the relief based on willful infringement could potentially be dismissed.

Further information about this case is as follows: