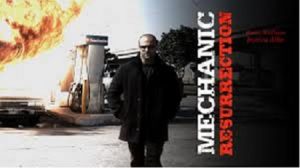 The lawsuit lists nine anonymous “Doe” Defendants, accusing them of infringing the copyright of the movie, which has been registered with the U.S. Copyright Office under Registration No. PA-1-998-057.  Plaintiff contends that the Doe Defendants illegally distributed a “screener copy” of the film via BitTorrent, a file-sharing protocol.  Plaintiff further asserted that this was done “in a collective and interdependent manner with other Defendants via the Internet for the unlawful purpose of reproducing, exchanging, and distributing copyrighted material.”

The movie, which is the sequel to the 2011 action film Resurrection, stars Jason Statham, Jessica Alba and Tommy Lee Jones. Plaintiff contends that the Doe Defendants are Indiana residents, stating that it determined through the use of geolocation technology that each had an Indiana Internet Protocol address.

This litigation, filed by a copyright lawyer for ME2 Productions, lists a single count – copyright infringement – and asks the court to award injunctive relief, damages, costs and attorneys’ fees.