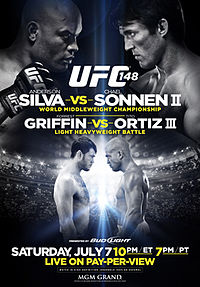 Joe Hand Promotions was granted rights to distribute the Program, which was telecast nationwide on Saturday, July 7, 2012. In the complaint against Casteel and Casteel Enterprises, both d/b/a Johnson’s Tavern, an intellectual property lawyer for Joe Hand Promotions has alleged such wrongful acts as interception, reception, publication, divulgence, display and/or exhibition,” claiming that Defendants “tortuously [sic] obtained possession of the Program” and engaged in conversion when they displayed the Program in Johnson’s Tavern.

In addition to naming the separate legal entity which allegedly owns Johnson’s Tavern, Joe Hand Promotions has also sued Casteel as an individual, claiming that he is an officer of Casteel Enterprises and that he had the right and ability to supervise the activities of Johnson’s Tavern on the night of the Program. Plaintiff asserts that those activities included the unlawful interception of its UFC Program. It further claims that Johnson’s Tavern and Casteel received financial benefit from the unlawful display of the Program.

Practice Tip #1: Joe Hand Productions has sued two entities: a corporation and an individual who is allegedly a principal of that corporation. While corporations were designed, among other purposes, to limit the liability of the principals, they are not always successful in doing so. Where a principal is personally involved in certain types of illegal activity, legal mechanisms (such as a corporation or a limited liability company) that are designed to shield the principal from liability may fail to do so.

Practice Tip #2: While on the surface this appears to be a copyright case, an allegation of interception under 47 U.S.C. § 605 is a different cause of action from copyright infringement. However, a suit alleging interception does not preclude an additional lawsuit alleging different causes of action. For example, the copyright holder can also sue for copyright infringement, which could increase damages by as much as $150,000.

This complaint was filed by Charlie W. Gordon of Greene & Cooper LLP. The case was assigned to District Judge Jon E. DeGuilo and Magistrate Judge Christopher A. Nuechterlein in the Northern District of Indiana and assigned Case No. 3:14-cv-1698-JD-CAN.