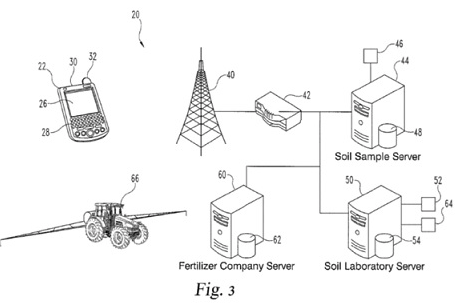 At issue in this patent litigation is U.S. Patent No. 8,286,857 (the “`857 Patent” or the “patent-in-Suit”), to which Agri-Labs claims ownership. The patent-in-suit, which was issued based upon an application filed by inventor Tony Wayne Covely, has been registered by the U.S. Patent Office. The `857 Patent generally relates to a system and method for performing soil analysis that uses smart phones, applications for smart phones, soil containers having unique identifiers, and global positioning (“GPS”).

In January, an Indiana patent attorney for Agri-Labs filed an intellectual property complaint in the Northern District of Indiana Fort Wayne Division alleging that TapLogic infringed on the ‘857 Patent. TapLogic counterclaimed. It asked the court for a declaratory judgment that it has not infringed Agri-Labs’ patent and that the claims of the patent are invalid. On July 1, 2015, the parties exchanged their respective contentions regarding infringement.

The instant order addresses Agri-Labs’ request that the court order TapLogic to provide a more detailed PNIC. Agri-Labs asserts that the PNICs it received were deficient, providing “nothing more than vague, conclusory language that simply mimics the language of the claims when identifying its theories of non-infringement.”

The case was assigned to Judge Robert L. Miller, Jr. and Magistrate Judge Susan L. Collins in the Northern District of Indiana, Fort Wayne Division and assigned Case No. 1:15-cv-00026-RLM-SLC.