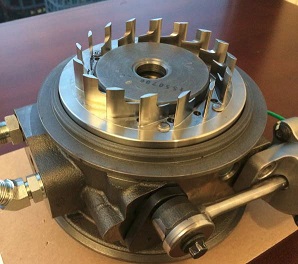 Indianapolis, Indiana – Patent attorneys for Plaintiffs Cummins Ltd., headquartered in the United Kingdom, and Cummins Inc. of Columbus, Indiana commenced patent infringement litigation in the Southern District of Indiana. The Defendants are ADP Distributors USA, Inc. of Tempe, Arizona and ADP Distributors, Inc., headquartered in British Columbia, Canada. They are accused of infringing two of Plaintiffs’ U.S. patents, both of which have been filed with the U.S. Patent and Trademark Office.

Defendants are accused of infringing U.S. Patent No. 6,401,563 (“the ‘563 patent”), entitled “Actuating Mechanism For A Slidable Nozzle Ring” and U.S. Patent No. 5,941,684 (“the ‘684 patent”), entitled “Variable Geometry Turbine.” The ‘563 patent is directed to certain components of a turbocharger or turbomachine and to a linkage assembly for linking together certain components within a turbocharger or turbomachine, while the claims of the ‘684 patent “are generally directed to a turbine, such as one used in connection with a turbocharger, having one or more springs which provide non-linear length to spring force characteristics on a displaceable sidewall.”

Defendants’ accused products include the Rotomaster Turbocharger, offered under model number H1550112N, and a Rotomaster replacement part. Defendants are accused of acting individually or in concert with others or each other to advertise for sale, offer for sale, import, sell and/or use these products in the U.S.

This federal lawsuit, filed with the trial court by patent lawyers for the Plaintiffs, alleges the following claims:

The case was assigned to Judge Jane Magnus-Stinson and Magistrate Judge Mark J. Dinsmore in the Southern District of Indiana and assigned Case No. 1:16-cv-00215-JMS-MJD.