Fort Wayne, Indiana – Patent lawyers for Richard Gramm and Headsight, Inc., both of Indiana, sued in the Northern District of Indiana alleging that Deere and Company of Moline, 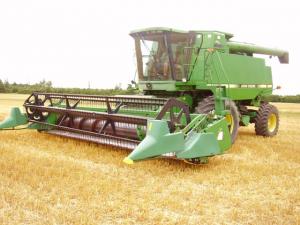 Illinois (also known as “John Deere”) infringed the patented “Combine Header Height Control“, Patent No. 6,202,395, which has been issued by the U.S. Patent Office.

Gramm, the founder and President of Plaintiff Headsight, claims to own all right, title and interest to Patent No. 6,202,395 (the “395 patent”). In its complaint, Plaintiffs allege that Deere makes, uses, sells and/or offers for sale products that infringe at least claim 27 of the ‘395 patent, including at least the header height sensor kit, for the Deere 600C Series corn headers (the “Deere Height Sensor”).

Plaintiffs contend that Deere has had actual knowledge of the ‘395 patent since at least as early as 2002 and that Deere has been and now is directly infringing, actively inducing others to infringe and/or contributing to the infringement of the ‘395 patent by making, using, selling, offering for sale and/or importing in the United States products, including at least the Deere Height Sensor, in violation of 35 U.S.C. § 271.

Plaintiffs assert one claim in their complaint, filed by Indiana patent attorneys: “Count I: Patent Infringement of U.S. Patent No. 6,202,395.” Gramm and Headsight ask the court for:

A court may award increased damages for willful infringement. These punitive damages, up to and including a trebling of damages, are appropriate when an infringer has acted in wanton disregard of the patentee’s intellectual property rights. In determining whether the infringing behavior supports increased damages, the court will consider the “totality of the circumstances.”

Potential exposure for increased damages may be reduced by seeking – and acting on – timely advice from a competent patent lawyer. In contrast, the failure to seek and heed such advice may increase the chance of a finding of willfulness.

The case was filed by Jeffery A. Johnson and Daniel R. Appelget of May Oberfell Lorber. The case was assigned to District Judge Theresa L. Springmann and Magistrate Judge Christopher A. Nuechterlein in the Northern District of Indiana and assigned Case No. 3:14-cv-00575-TLS-CAN.