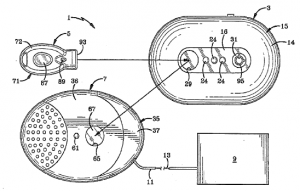 patent”) for a “Programmable Security System and Method for Protecting Merchandise”.   Plaintiff is seeking a permanent injunction, damages, judgment awarding InVue a reasonable royalty, prejudgment interest, and other relief the Court may deem just and proper.

Chief executive officers for both parties met in person on April 11, 2018 to discuss the defendant’s Intellikey 3.0, its Gateway products, and other potentially infringing items “Accused Items”. The plaintiff provided defendant with a copy of at least Claim 1 of the pending ‘266 patent, informing them that the Intellikey 3.0 would infringe the claims of the ‘266 patent when issued. The application for the ‘266 patent published on August 16, 2018 and the ‘266 patent issued on August 28, 2018, just before the Complaint was filed.