Litigation by patent-assertion entities (“PAEs,” commonly known as “patent trolls”) has skyrocketed in the last two years.  A chart released by the White House in a June 2013 report entitled “Patent Assertion and U.S. Innovation” demonstrates that such trolls now file over 60% of all patent-infringement lawsuits.  (The red portion of the bars shows patent lawsuits brought by PAEs.) 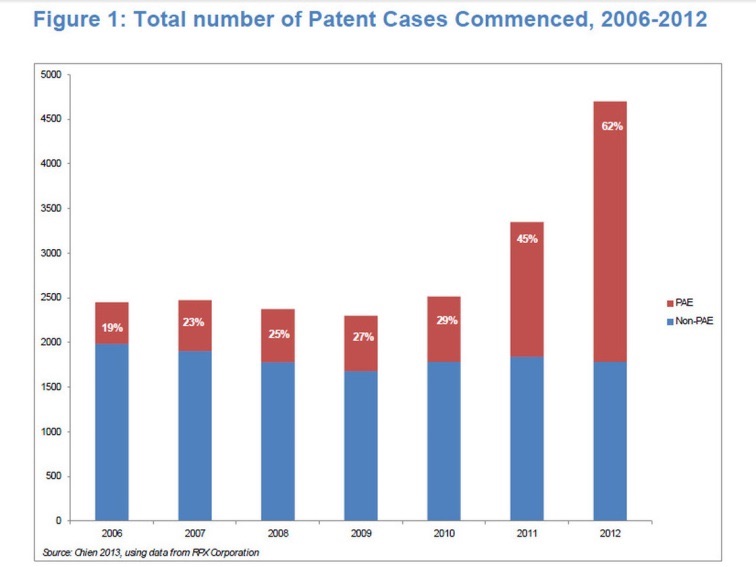 The patent-trolling business model includes no productive operations.  Instead, investors’ money is used to purchase patents for the sole purpose of alleging infringement and extracting payment under the threat of litigation.  Because litigation can be very costly, the patent trolls’ targets face a difficult decision: settle (typically by buying a license from the troll) or pay significant litigation expenses — and face the potential of losing at trial, which is somewhat unlikely but where damages can be enormous.  In contrast, the trolls often use contingency-fee attorneys and, thus, have little more at stake in any given lawsuit than a few hundred dollars for a court-filing fee.

Many view this type of litigation with suspicion, if not outright derision.  At least four patent-reform bills are pending in Congress and the Obama Administration recently released a harsh indictment detailing the damage to innovation and the economy caused by the “abusive practices in litigation” committed by patent trolls.  Various measures to curb frivolous patent litigation have been suggested, including increasing transparency of patent ownership and establishing a website through the U.S. Patent and Trademark Office to inform patent-troll victims of their rights.

Perhaps most telling, though, are the opinions of the most prominent patent judge in the nation, Randall Rader, the Chief Judge for the U.S. Court of Appeals for the Federal Circuit, which hears the appeals for all trial-court judgments involving patent infringement.  In an opinion piece in the New York Times, Chief Judge Rader accused trolls of not “fighting fairly,” filing a “vast number of frivolous patent lawsuits,” and “using the threat of litigation cost, rather than the merits of a claim, to bully a defendant into settling.”

These manipulations of the legal system, he says, have cost defendants and taxpayers tens of billions of dollars each year and have “slowed the development of new products, increased costs for businesses and consumers, and clogged our judicial system.”  His solution is simple.  He urges courts to use the power they already possess: to look for abusive patent litigation and shift the costs of a frivolous lawsuit — which routinely exceed $1 million for a matter taken through trial — to the entity which brought the matter to court.