& Resorts, LLC (collectively the “Defendants”) in the Northern District of Illinois, Eastern 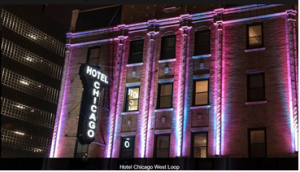 District. The case was voluntarily dismissed by LHO and after being denied their Lanham Act attorney fees, the Defendants appealed to the United States Court of Appeals for the Seventh Circuit. The Court of Appeals held the Supreme Court’s decision in Octane Fitness, LLC v. ICON Health & Fitness, Inc., 572 U.S. 545 (2014), which was a patent case, should guide district courts when facing attorney fee applications under the Lanham Act.

LHO’s upscale hotel in downtown Chicago underwent a branding change to become “Hotel Chicago” in February 2014. Just over two years later, the Defendants opened their own “Hotel Chicago” about three miles from LHO’s hotel. LHO then sued “for trademark infringement and unfair competition under the Lanham Act, 15 U.S.C. § 1125(a), and for trademark infringement and deceptive trade practices under Illinois state law.” After litigating for over one year, LHO moved to voluntarily dismiss its claims and the judgment was entered on February 21, 2018.

After judgment was entered, pursuant to 15 U.S.C. § 1117(a), Defendants made a post-judgment request for attorney fees. In their brief, the Defendants cited two different standards for determining if attorney fees should be granted: (1) the Seventh Circuit’s prevailing standard, “that a case is exceptional under § 1117(a) if the decision to bring the claim constitutes an ‘abuse of process’; and (2) the more relaxed totality-of-the-circumstances approach under the Patent Act” from the Octane case. The district judge acknowledged Octane in his findings but did not adopt that approach and denied Defendants request for attorney fees.

On appeal, the Court of Appeals noted “based on our current caselaw, a party’s substantively weak position or strategy might make a case ‘stand out from others,’ but without extortionate or external motives fueling the litigation, the case cannot be deemed exceptional under § 1117(a).” The Court further noted it would not be fair that such a case be deemed unexceptional and therefore prevent the recovery of attorney fees. Most circuits “have extended Octane to the Lanham Act’s fee-shifting provision, relying on legislative history, the Patent Act’s identical language, and the Supreme Court’s use of trademark law in Octane.” As such, the Court of Appeals here adopted Octane’s “exceptional case” standard and remanded this case to the district judge so he may “address the parties’ fee dispute under Octane”.

This case was before Circuit Judges William J. Bauer, Daniel A. Manion and Amy J. St. Eve at the Seventh Circuit Court of Appeals, Case No. 19-1848.