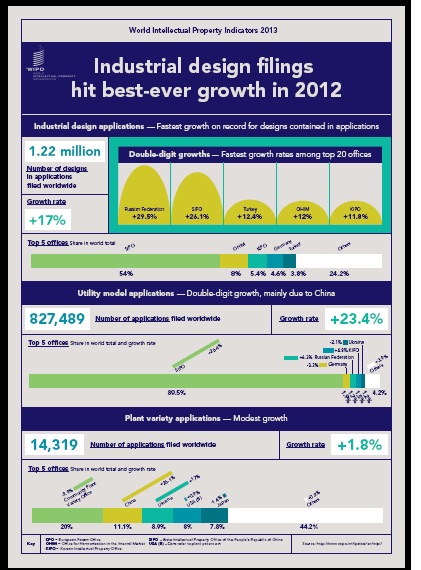 property (“IP”) filings have sharply rebounded since a 2009 decline at the height of the financial crisis.

The 2013 edition of the World Intellectual Property Indicators also shows that, for the first time, China tops the ranking for both the source (filings by China) and the destination (filed in China) for the four types of IP (patents, utility models, trademarks and industrial designs). Of the top five IP offices worldwide, the State Intellectual Property Office of the People’s Republic of China (“SIPO”) was alone in recording double-digit growth for each of the four types of IP. Continued rapid filing growth in China is the main driver of global IP growth.

“Following the 2009 financial crisis, global intellectual property filings and global economic output have followed diverging paths,” said WIPO Director General Francis Gurry. He added, “while economic recovery since the 2009 crisis has been uneven and has failed to bring down unacceptably high levels of unemployment, IP filings have increased at a faster rate than before the crisis.”

Patent filings by field of technology differ across origins. Residents of Israel and the U.S. filed a high share of their applications in the computer and medical technologies fields. Applications filed by residents of Belgium, India and Switzerland were more concentrated in the organic fine chemistry field. Resident of Brazil filed a high share of applications in basic materials chemistry, while China and the Russian Federation focused their filings on material metallurgy technologies. In contrast, a higher share of applications filed by residents of Japan, Singapore and the Republic of Korea fell within the field of semiconductors. Residents of European countries such as France, Germany and Sweden focused their filings on transport-related technologies.

Patent filings for energy-related technologies grew by 5.3% in 2012. Applications filed by residents of China Hong Kong (“SAR”), Israel and Switzerland were highly concentrated in solar energy, while those of Finland, Japan and the UK had higher shares dedicated to fuel-cell technology.

In 2012, the number of pending applications (i.e., unprocessed applications at any stage of the application process) fell at three of the top four IP offices. The JPO and the USPTO saw year-on-year decreases over the 2008-2012 period, while the Korean Intellectual Property Office (“KIPO”) reported an annual decrease only from 2011 to 2012. The EPO has witnessed continuous growth since 2004.

The total number of classes specified in trademark applications (i.e., class counts) filed worldwide grew by 6% in 2012; this was lower than the growth rates recorded in 2010 (9%) and in 2011 (9.5%). In 2012, a total of 6.58 million classes were specified in applications, which comprised 4.84 million resident application class counts and 1.74 million non-resident class counts.

The majority of the top 20 IP offices saw growth in class counts in 2012. Among the top 20 offices, the IP offices of two middle-income countries, namely Turkey (+24.1%) and China (+16.5%), reported the fastest growth. Mexico (+5.5%) and the Russian Federation (+7.9%) also exhibited strong growth in class counts for 2012. In contrast, the IP offices of European Union (EU) countries recorded fewer application class counts in 2012 than in 2011. For example, Italy reported an 8.3% decrease, while Germany and Spain reported decreases of 6.4% and 5.6%, respectively.

In 2012, residents of China filed, worldwide, applications with approximately 1.58 million class counts; this was significantly higher than the figures for the U.S. (599,896), Germany (387,503) and France (384,665). In many countries, the majority of trademarks were filed by residents with their respective domestic IP offices. However, there were some notable exceptions; a high proportion of total filings originating in Austria (49.5%), Switzerland (76.9%) and the U.S. (45%) were filed abroad.

Following a slowdown in both 2008 and 2009, the numbers of industrial designs contained in applications (i.e., design counts) rebounded strongly, with double-digit growth recorded in each of the three subsequent years (2010, 2011 and 2012). The 2012 growth of 17% was the highest since design count records became available in 2004. In 2012, applications containing an estimated 1.22 million designs were filed worldwide, comprised of 1.04 million resident filings and 0.17 million non-resident filings.

In 2012, the largest number of plant variety applications originated in the Netherlands (2,560), followed by the U.S. (1,829) and China (1,465). Residents of France, Germany and Japan had similar numbers of applications (approximately 1,000 each). However, twelve of the top 20 origins, including the top two origins, filed fewer applications in 2012 than in 2011.

Practice Tip # 2: Like patents, UMs protect inventions for a limited period of time. However, the terms and conditions for granting UMs are different from those for “traditional” patents. In certain countries, UMs are known as “petty patents,” “short-term patents” or “innovation patents.”

Practice Tip # 3: Class counts are the total number of classes specified in trademark applications. Some IP offices have a single-class filing system, which requires applicants to file a separate application for each class in which the goods or services to which the mark is applied are classified. Other offices follow a multi-class filing system, which enables applicants to file a single application in which goods or services belonging to a number of classes can be specified. In order to make better international comparisons between numbers of applications received, it is important to compare class counts across IP offices.