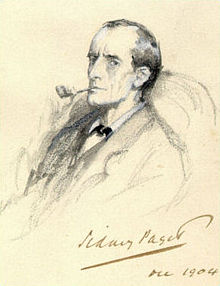 Chicago, Illinois – California attorney Leslie S. Klinger, co-editor of multiple collections of annotated works based on Arthur Conan Doyle‘s Sherlock Holmes fiction sued Conan Doyle Estate, Ltd. under the Declaratory Judgment Act in the Northern District of Illinois seeking a declaratory judgment that he may freely use material from those Sherlock Holmes works for which copyright protection has expired. The district court held that Klinger’s use of material that was no longer subject to copyright was permissible. The Seventh Circuit affirmed.

Arthur Conan Doyle published 56 stories and 4 novels featuring the fictional character Sherlock Holmes. Of these stories, only the final 10, published between 1923 and 1927, are still protected by copyright.

Leslie Klinger, Plaintiff-Appellee, co-edited an anthology called A Study in Sherlock: Stories Inspired by the Sherlock Holmes Canon. Klinger had not sought a license from Doyle’s estate, presuming that one was not necessary, as the copyrights on most of the works in the “canon” had expired. The estate disagreed and demanded that Random House, which had agreed to publish Klinger’s book, pay $5,000 for a copyright license. Random House acquiesced and, in 2011, the anthology was published.

The trouble began when Klinger and his co-editor decided to create a sequel, “In the Company of Sherlock Holmes” and entered into negotiations with Pegasus Books, a publisher. The Doyle estate again demanded a fee for a copyright license and threatened to interfere with distribution of the book if that copyright license fee was not paid, telling Pegasus, “If you proceed instead to bring out Study in Sherlock II [the original title of “In the Company of Sherlock Holmes”] unlicensed, do not expect to see it offered for sale by Amazon, Barnes & Noble, and similar retailers. We work with those compan[ies] routinely to weed out unlicensed uses of Sherlock Holmes from their offerings, and will not hesitate to do so with your book as well.” No threat of a lawsuit for copyright infringement was explicitly made. Pegasus subsequently refused to publish the book unless and until Klinger obtained a copyright license from the Doyle estate.

Instead of purchasing a license, Klinger sued the estate seeking a declaratory judgment that he could freely use any material from the Sherlock Holmes works for which the period of copyright protection had expired.

The district court held in Klinger’s favor. The estate appealed to the Seventh Circuit on two alternative grounds. The estate first contended that the district court lacked subject matter jurisdiction under the Declaratory Judgment Act because there was no “actual case or controversy.” Second, it asserted that a copyright on a “complex” character, whose full complexity is not revealed until a later story, remains protected under copyright law until the later story falls into the public domain.

Circuit Judge Posner, writing for the court, rejected both arguments. The “case or controversy,” necessary for federal jurisdiction was demonstrated by the estate’s “twin threats” of blocking the distribution of the book and the implied threat of a copyright lawsuit against the publisher, Klinger and the book’s co-editor for copyright infringement if the book were published without a license. That such a case or controversy existed was also demonstrated by the fact that Klinger could have sued on a claim of tortious interference with advantageous business relations as a result of the estate’s intimidation of his publisher.

The court then considered the question of “whether copyright protection of a fictional character can be extended beyond the expiration of the copyright on it because the author altered the character in a subsequent work.” The estate urged the court to grant additional copyright protection in its case, arguing that characters such as Sherlock Holmes were “round” and/or “complex” and thus deserving of greater shelter under copyright law than fictional characters that were “flat” and/or “simple.”

The court could find no basis in statute or case law to support the extension of a copyright beyond its expiration. Thus, it affirmed the uncontested matter of copyright protection for the later works – namely, a right to recover for copyright infringement still existed for some portions of the Sherlock Holmes works for which the copyrights had not yet expired. However, that protection was limited to only those elements of the later Sherlock Holmes works that included “incremental additions of originality.” The remainder, the court opined, had passed into the public domain, regardless of the dimensions of the characters portrayed.

Practice Tip: The court was also unpersuaded by the Doyle estate’s argument to extend copyright law on the grounds that failure to do so would diminish authors’ incentives to create. After noting that Arthur Conan Doyle had died 84 years prior, thus rendering the argument inapplicable in the current litigation, the court noted that “extending copyright protection is a two-edged sword from the standpoint of inducing creativity, as it would reduce the incentive of subsequent authors to create derivative works (such as new versions of popular fictional characters like Holmes and Watson) by shrinking the public domain.”

The case was assigned to Chief Judge Ruben Castillo in the Northern District of Illinois. It was subsequently heard as Case No. 14-1128 in the United States Court of Appeals for the Seventh Circuit by Circuit Judges Posner, Flaum, and Manion.