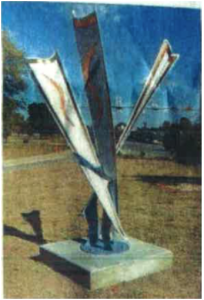 work of visual art under the Visual Artists Rights Act (“VARA”). Plaintiff is seeking judgment in the amount of $150.000, attorney’s fees, and other relief the Court deems appropriate.

In 2010, Plaintiff completed a 9-foot tall sculpture named Trinity, meant to symbolize the Holy Trinity in Christianity. The sculpture contains steel beams and a combination of gold and silver paint. The sculpture was sponsored by the city of Seymour, as part of an initiative to enhance various spots around town with artwork.

Trinity was loaned to the city and then displayed at an intersection in town, until a member of the Department of Public Works requested it be removed. The sculpture was removed and stored in a garage, where Plaintiff eventually found it laying on its side in the gravel. According to the complaint, the sculpture was damaged all over with scratches and gouges in the steel and bent parts.

Plaintiff alleges that the city’s damaging of the sculpture violates VARA. He has requested statutory damages under VARA as well as other relief.

On the surface, this language appears to constitute an abrogation of states’ sovereign immunity regarding copyright infringement. However, the U.S. Supreme Court has held that “Congress may not abrogate state sovereign immunity pursuant to its Article I powers.” Florida Prepaid Postsecondary Educ. Expense Bd. v. College Sav. Bank, 527 U.S 627, 636 (1999).

However, it appears that the Copyright Remedy Clarification Act has attempted to do just that. According to at least one recent decision out of a federal district court in Lexington, Kentucky, Article I is indeed what Congress relied upon to authorize the passage of the Act purporting to abrogate states’ rights with respect to copyright infringement lawsuits. This, the court held, rendered the attempted abrogation invalid. That litigation was consequently dismissed by the court as barred by the doctrine of sovereign immunity.  In addition, several copyright infringement lawsuits by serial copyright infringement plaintiff Richard Bell have been rejected on grounds of sovereign immunity, including claims against Purdue University and Indiana University.