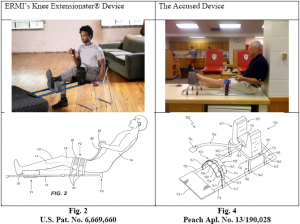 According to the Complaint, Dr. Thomas P. Branch (“Dr. Branch”) while practicing as a board certified orthopedic surgeon with TREX Orthopedics, P.C., invented the orthotic apparatus claimed in the ‘660 Patent. Dr. Branch allegedly assigned all rights to the continuation patent application that led to the issuance of the ‘660 Patent to ERMI. The ‘660 Patent expired on August 10, 2019. ERMI claims it produces and sells the ERMI Knee Extensionater® device that is covered by the claims of the ‘660 Patent and marked with the ‘660 Patent number.

The case was assigned to Senior Judge Sarah Evans Barker and Magistrate Judge Tim A. Baker in the Southern District and assigned Case 1:19-cv-004628-SEB-TAB.