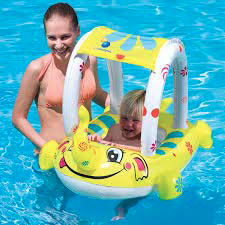 Intex and Bestway compete in the business of selling inflatable pool products and accessories. In this Indiana patent lawsuit, Intex contends that Bestway has made, used, offered to sell, sold, and/or imported into the United States, inflatable products that infringe one or more claims of United States Patent No. 6,749,474 (“the ‘474 Patent”), which relates to an inflatable flotation device having a removable canopy and which Intex indicates it owns. Intex claims that Bestway’s accused products are or were available, and are or were being offered for sale and sold, via the internet on at least Amazon.com and at Kmart stores and/or Kmart’s website, including to customers located within Indiana. Intex claims that one example of an infringing product offered by Bestway’s is Bestway’s UV Careful™ Baby Care Seats.

In this Indiana patent litigation, a single count is alleged: infringement of U.S. Patent No. 6,749,474. Intex contends that Bestway’s infringement of the ‘474 Patent is willful and justifies a trebling of damages pursuant to 35 U.S.C. § 284. Further, it asserts that is an exceptional case supporting an award of reasonable attorneys’ fees pursuant to 35 U.S.C. § 285. Intex, via its Indiana patent lawyers, asks that the court:

The suit was filed by R. Trevor Carter and Trenton B. Morton of Faegre Baker Daniels LLP. The case was assigned to Judge William T. Lawrence and Magistrate Judge Denise K. LaRue in the Southern District of Indiana and assigned Case No. 1:14-cv-01952-WTL-DKL.