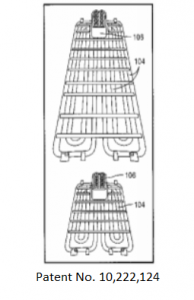 According to the complaint, New Berry is the owner and assignee of both the ‘124 Patent, which was filed February 1, 2013 and issued on March 5, 2019, and the ‘076 Patent, which issued on September 1, 2015. New Berry claims that Smith signed an Employment Agreement with New Berry in 1996, which among other things assigned all of Smith’s inventions during his employment to New Berry and prohibited Smith from using or disclosing any trade secrets that pertain to New Berry’s products and services. Smith is listed as the inventor of the ‘124 Patent and a co-inventor of the ‘076 Patent.

New Berry claims that Smith, who left New Berry in 2015, is collaborating with MacRae and MacRae Technologies and has shared New Berry’s trade secrets with them. MacRae filed a patent application November 16, 2017 that issued as U.S. Patent No. 9,963,754 (the “’754 Patent”) on May 8, 2018. The complaint alleges MacRae assigned the ‘754 Patent to MacRae Technologies on March 6, 2019. New Berry claims that the “‘124 Patent reads on the staves comprising center manifold technology described and claimed in the ‘754 Patent.”

The complaint alleges that New Berry lost a bid for one of its clients, United States Steel Corporation (“USS”), to a Brazilian company, Cecal Industria e Comercio Ltda. (“Cecal”). Further, the complaint alleges the Defendants licensed the technology manufactured by Cecal based on the ‘754 Patent and that the technology licensed infringes on New Berry’s rights in at least the ‘124 Patent. New Berry claims it sent a notice letter regarding its rights to Cecal on August 3, 2018. In March 2019, while out for a service call to USS, New Berry claims its employees discovered the alleged infringing devices prior to installation. New Berry believes the device manufactured by Cecal infringes both the ‘124 Patent and the ‘076 Patent.