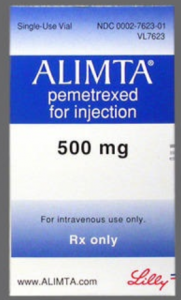 The ‘209 Patent at issue here is a method patent for administering pemetrexed disodium, a chemotherapy drug, with vitamins, the combination of which is marketed as ALITMA® by Lilly. This invention helps to solve the toxicity issue in chemotherapy patients being treated with pemetrexed. The particular regimen of vitamin  and folic acid are important for the pretreatment of these patients. As of December 2015, Dr. Reddy’s informed Lilly that it had submitted a FDA New Drug Application for a product that would be marketed as a competing product to ALITMA®.

The first issue the Court had to decide was whether Lilly was barred from asserting the doctrine of equivalents under prosecution history estoppel. The Court held that Lilly had not surrendered the equivalent in question because their decision to use the choice pemetrexed salt was tangential to the reasons for the amendment. The choice to narrow was simply to overcome a rejection in view of a prior art article about a different antifolate, methotrexate.

The main issue for this case was whether the use of pemetrexed ditromethamine product on Dr. Reddy’s label infringed the ‘209 Patent’s use of pemetrexed disodium, under the doctrine of equivalents. First, the Court needed to determine if the definition for a relevant POSA would be a chemist, as Dr. Reddy’s would prefer, or an oncologist, Lilly’s preferred definition. The Court found that the “relevant POSA who works to mitigate the toxicities of chemotherapy would be an oncologist.” Next, the Court had to determine if the function, way, result test, or the insubstantial differences test should be applied to the facts at hand. The Court decided that because the equivalency was based on chemical properties, the insubstantial differences test was more appropriate. Finally, under the context of this situation, the Court found that the pemetrexed ditromethamine and pemetrexed disodium treat a patient’s cancer in exactly the same way and that Dr. Reddy’s product was equivalent to Lilly’s product.

A generic reference to a written specification does not automatically dedicate all members of a particular genus to the public. “Rather, the ‘disclosure must be of such specificity that one of ordinary skill in the art could identify the subject matter that had been disclosed and not claimed.’Additionally, in Pfizer Inc. v. Teva Pharmaceuticals, USA, Inc., 429 F.3d 1364 (Fed. Cir. 2005), this court further clarified that ‘before unclaimed subject matter is deemed to have been dedicated to the public, that unclaimed subject matter must have been identified by the patentee as an alternative to a claim limitation.’” See SanDisk Corp. v. Kingston Technology Co., Inc., 695 F.3d 1348, 1363 (Fed. Cir. 2012).

The case was assigned to Judge Tanya Walton Pratt and Magistrate Judge Matthew P. Brookman in the Southern District and assigned Case 1:16-cv-00308-TWP-MPB.