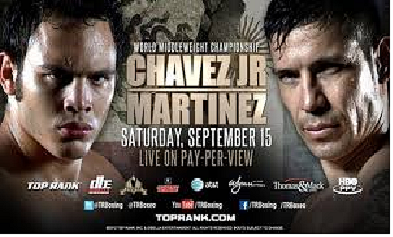 Defendant Minerva Soriano, alleged to be an owner and/or an individual with control, oversight and management of Soriano’s Mexican Restaurant has been sued for the illegal interception of the Julio Cesar Chavez, Jr. v. Sergio Martinez WBC Middleweight Championship Fight Program (the “Program”). Soriano’s Mexican Restaurant, LLC, the legal entity which apparently owns the restaurant, has also been sued.

Plaintiff J & J Sports alleges that it was granted the exclusive nationwide television distribution rights to the Program, including all under-card bouts and fight commentary included in the television broadcast of the event. It states that it entered into subsequent sublicensing agreements with various commercial entities, which were, in turn, granted certain commercial sublicensing rights to the Program.

J & J Sports contends that, “with full knowledge that the Program was not to be intercepted, received and exhibited by entities unauthorized to do so” Defendants and/or their agents unlawfully published, divulged and exhibited the Program. It further asserts that this conduct was “willful, malicious, and intentionally designed to harm” J & J Sports and to cause economic distress.

In the Indiana intellectual property complaint filed on behalf of J & J Sports, the following is alleged:

Finally, for the count of conversion, J & J Sports asks: for compensatory damages in an amount according to proof against Defendants, and for reasonable attorney fees, and for all costs of the lawsuit, including but not limited to filing fees, service of process fees, investigative costs.

J & J Sports is a frequent litigant but it is relatively infrequent that a trial on the merits of its intellectual property claims is held. In 2010, it sued in the United States District Court for the Northern District of Texas alleging unauthorized interception and broadcast of the December 2007 “Undefeated” match between Floyd Mayweather and Ricky Hatton. Defendants argued that the broadcast had been authorized by its cable provider. Specifically, Time Warner Cable, which had been licensed to provide the non-commercial rights, expressly admitted that it had inadvertently authorized the commercial display of the broadcast. Time Warner Cable had also offered to pay to J & J Sports the liquidated damages that the contract required in cases of such a breach. On a motion for summary judgment, the trial court agreed with J & J Sports’ allegations that either a violation of § 605 or § 553 had occurred and awarded to J & J Sports statutory damages of $350 and costs and attorneys’ fees of $26,780.30.

The U.S. Court of Appeals for the Fifth Circuit reversed. The issue of whether § 605 applied was one of first impression for the court. It stated that § 605 did not apply to that case, holding that the receipt or interception of communications by wire from a cable system was not governed by § 605. The court then evaluated Defendants’ conduct under the “safe harbor” provision of § 553. That provision exempts from liability any cable recipient who is authorized by a cable company to receive a transmission. In this case,Time Warner Cable’s representative admitted that it had inadvertently sold the broadcast of the fight to Defendants for a non-commercial price, despite knowing that Defendants ran a commercial establishment. This, held the Fifth Circuit, was enough to create a material fact regarding whether Defendants in that case had violated § 553 making the trial court’s grant of summary judgment reversible error.

The suit was filed by Charlie W. Gordon of Greene & Cooper LLP. The case was assigned to Judge Jane Magnus-Stinson and Magistrate Judge Tim A. Baker in the Southern District of Indiana and assigned Case No. 1:14-cv-01493-JMS-TAB.