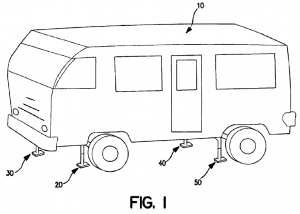 Method for Automatically Leveling an Object”. In addition to filing its Reply and Sur-Reply to the inter partes review, Days also filed a Motion to Amend the ‘693 Patent. Days also filed a Motion to Exclude Evidence prior to the oral hearing. The United States Patent Trial and Appeal Board (the “PTAB”) determined claims 12 and 13 of the ‘693 Patent are unpatentable, denied Days’ Motion to Amend, and dismissed Days’ Motion to Exclude as moot.

The ‘693 Patent “discloses an apparatus for automatically leveling a vehicle, such as a recreational vehicle, that is located on uneven terrain or an out-of-level surface.” The vehicle to be leveled contains four adjustable legs that can be manually lowered and raised to achieve a feeling of true level relative to horizontal in the interior of the vehicle. The leveling process can also be performed automatically with the use of a controller. The person having ordinary skill in the art for the Court’s analysis was found to be a person having “either a bachelor’s degree in engineering, preferably mechanical or electrical, or at least five years of work experience in the field of vehicle leveling systems and related equipment.”

Lippert claimed the ‘693 Patent was anticipated by Uriarte pursuant to 35 U.S.C. § 102(b). Under 35 U.S.C. § 102(b), a patent claim is unpatentable “if each and every limitation is found either expressly or inherently in a single prior art reference.” WhitServe, LLC v. Computer Packages, Inc., 694 F.3d 10, 21 (Fed. Cir. 2012) (quoting Celeritas Techs., Ltd. V. Rockwell Int’l Corp., 150 F.3d 1354, 1361 (Fed. Cir. 1998). Uriarte discloses “[a] system for automatically leveling a vehicle, such as a recreational vehicle.” While Days claimed that the Uriarte Patent is not enabling, and therefore the ‘693 Patent could not be anticipated by the Uriarte Patent, the Court held it was enabling. The Court further held the Uriarte Patent disclosed each and every limitation of claims 12 and 13 of the ‘693 Patent and as such those claims are unpatentable as anticipated by Uriarte under 35 U.S.C. § 102(b).

After finding claims 12 and 13 of the ‘693 Patent unpatentable, the Court discussed Days’ Motion to Amend any claim found unpatentable. The Court held that Days did not meet “its burden of production in asserting that proposed claims 15 and 16 have written description support in the original application.” First, Days did not make all arguments for the requested relief in its Motion to Amend. Second, the burden of production may not be met with “mere string citations to an original application’s disclosure without explanation.” The Court further held that proposed claims 15 and 16 are unpatentable as obvious over Uriarte, Hanser, and Amelotte and further unpatentable over Uriarte, Fukumoto, Hanser, and Amelotte.

The decision was from the USPTO, Patent Trial and Appeal Board before Scott A. Daniels, Barry L. Grossman and George R. Hoskins, Administrative Patent Judges, dated September 24, 2019.