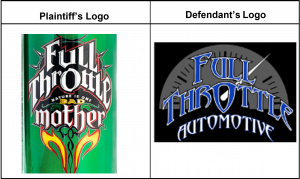 According to the Complaint, Defendant, Full Throttle Automotive LLC (“FTA”), is in the business of automotive repair services. Energy claims FTA promotes and provides its services using trademarks and trade dress that are confusingly similar to the Energy Marks and trade dress. FTA also apparently sponsors race cars using the allegedly infringing marks.

Energy claims that FTA has advertised and promoted its services using the allegedly infringing mark at an event for which Energy’s Full Throttle® brand was previously the title sponsor. Therefore, Energy asserts FTA’s actions are intended to cause confusion and to cause consumers and potential consumers to believe FTA is associated with the Energy goods and services. Energy claims it sent a cease and desist letter informing FTA of the Energy Marks and trade dress, but FTA has refused to discontinue its use of the allegedly infringing marks.

The case was assigned to Judge Richard L. Young and Magistrate Judge Matthew P. Brookman in the Southern District of Indiana and assigned Case No. 3:21-cv-00081-RLY-MPB.