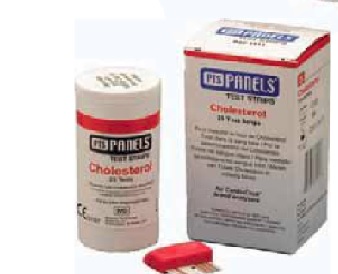 Korea”) infringed “Method for determining HDL concentration from whole blood or plasma,” Patent No. 7,087,397, which was issued by the U.S. Patent Office. PTS has also accused Defendants of federal unfair competition under the Lanham Act.

PTS develops, manufactures and sells point-of-care diagnostic products for the human healthcare market. At issue in this Indiana litigation is PTS’s “CardioChek® Multi-Analyte Strip,” a hand-held, point-of-care testing system that can test for total cholesterol, high-density lipoproteins (HDL) and triglycerides with a single drop of blood. In August 2006, Patent No. 7,087,397 (“the ‘397 Patent”) was issued to PTS. PTS indicates that this patent includes a significant portion of the technology embodied in this Indiana invention.

Defendant Infopia Korea has also developed a test strip that tests for total cholesterol, high-density lipoproteins and triglycerides. This system is branded as the LipidPlus Lipid Profile Test Strip. PTS contends that Infopia Korea imports the LipidPlus testing strip into the United States and that Defendants Infopia USA and Jant offer and sell the LipidPlus product in the U.S. market.

In its complaint, filed by Indiana trade-dress and patent lawyers, PTS alleges the following:

• Count I: Patent Infringement of the ‘397 Patent

• for a judgment that the ‘397 Patent is valid and enforceable;

• for a judgment of direct or indirect infringement, or inducement to infringe, by Defendants;

• to declare that Defendants have unfairly competed with PTS by infringing and misappropriating PTS’s trade dress;

• for an award to PTS of lost profits and a reasonable royalty for Defendants’ acts of patent infringement and trade-dress infringement;

• to treble the award of damages pursuant to a finding of willful, intentional and deliberate infringement;

• for an injunction prohibiting Defendants from engaging in acts of infringement or unfair competition; and

• for a declaration that the case is exceptional and an award of attorneys’ fees.

Practice Tip: The United States Supreme Court addressed the elements required for trade dress to be protected in Two Pesos, Inc. v. Taco Cabana, Inc., 505 U.S. 763 (1992). In Two Pesos, the Court held that, to establish a cause of action for trade dress infringement, a plaintiff must establish that (a) the design is non-functional; (b) the design is inherently distinctive or distinctive by virtue of having acquired secondary meaning; and (c) there is a likelihood of confusion.

The suit was filed by David J. Hensel and Julie Smith of Pence Hensel LLC. The case was assigned to Chief Judge Richard L. Young and Magistrate Judge Denise K. LaRue in the Southern District of Indiana and assigned Case No. 1:14-cv-1317-RYL-DKL.