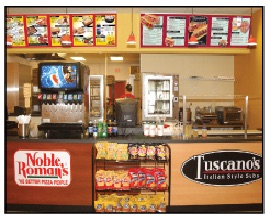 Noble Roman’s is in the business of franchising the operation of Noble Roman’s pizza franchises that feature pizza, breadsticks, and other related food items to various franchisees throughout the world. Noble Roman’s has used its trademarks, among them “Noble Roman’s” and “The Better Pizza People,” registered in 1974 and 1995, respectively, in commerce in connection with marketing, identifying, and promoting its pizza franchises.

On or about March 16, 2010, Noble Roman’s and B & MP entered into two franchise agreements. Under the terms of the agreements, B & MP became a franchisee of Noble Roman’s licensed and authorized to sell “Noble Roman’s” and “Tuscano’s” branded food products using Noble Roman’s intellectual property assets. These agreements included terms relating to the accurate reporting of sales and timely payment of franchise and other fees.

B & MP is accused of failing to pay royalties as required under the agreement and of misreporting sales, among other things. Noble Roman’s contends that B & MP purposely, intentionally and knowingly misreported its sales to Noble Roman’s for the purpose of avoiding payment of franchise fees and/or royalties which were due.

Although the complaint lists two Defendants, Noble Roman’s states that Defendant B & MP was involuntarily dissolved in 2011 and that Defendant Leslie Perdriau succeeded to its obligations.

The complaint, filed by an Indiana trademark lawyer, lists the following:

Noble Roman’s asks for judgment in its favor in amount to be proven at trial, together with interest, punitive damages, costs of collection and reasonable attorneys’ fees.

Practice Tip: Noble Roman’s has been particularly aggressive in enforcing franchise agreements. Since 2007, it has also filed the following suits in the Southern District of Indiana:

The suit was filed by Steven K. Huffer of S.K. Huffer & Associates, P.C. The case was assigned to District Judge William T. Lawrence and Magistrate Judge Mark J. Dinsmore in the Southern District of Indiana and assigned Case No. 1:14-cv-00206.