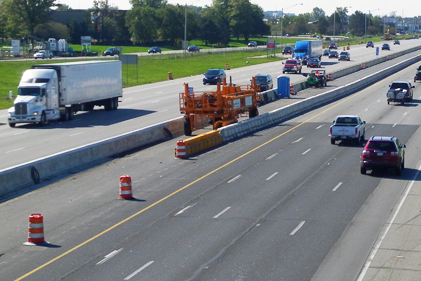 Kresnak and Superior Asphalt, Inc. (“Superior”), both of Michigan, infringed the RIETH-RILEY trademark, Trademark Registration No. 1,659,123, which has been issued by the U.S. Trademark Office.

Superior, in business for over 30 years, is in the asphalt manufacturing, supplying, paving and maintenance business. It provides its services to residential, commercial, manufacturing and municipal customers. Defendant Kresnak owns Superior. Rieth-Riley indicates that it considers Superior to be a competitor.

Both companies maintain websites to promote their companies. Rieth-Riley operates its website at www.riethriley.com. Superior operates its site at www.superiorasphalt.com/. Rieth-Riley contends that Superior also purchased and began operating “rieth-riley.net” in violation of Rieth-Riley’s intellectual property rights in the trademarked name; it further indicates that this accused domain name resolves to Superior’s website. Rieth-Riley states that it attempted to reach an agreement with Defendants to cease using the accused website but that, in response, Defendants indicated that they would do so for $10,000.

Rieth-Riley contends that Defendants are unlawfully profiting through their use of the Rieth-Riley trademark. Specifically, Superior is accused of using the rieth-riley.net domain name with a bad-faith intent to profit by redirecting Internet traffic intended for the Rieth-Riley website to Superior’s website.

Finally, Rieth-Riley asserts that this use was with notice and actual knowledge of Rieth-Riley’s prior rights and, as a result, Superior’s acts constitute knowing and willful violations of the Lanham Act.

In this Indiana trademark litigation, the following counts are asserted:

Rieth-Riley asks the court for:

Plaintiff indicates that it attempted to obtain an agreement from Defendants to cease using the accused domain name. Despite this effort, Plaintiff contends that Defendants continued to use the allegedly infringing website name. This lawsuit for trademark infringement, unfair competition and cyberpiracy followed.

Another approach available to a plaintiff in such a situation is to seek a transfer the domain name under the Uniform Domain-Name Dispute-Resolution Policy (“UDRP”). This policy was established to resolve “The Trademark Dilemma” inherent in the largely unpoliced sales of domain names — the registration of a trademark without the consent of the trademark owner.

As part of the process of registering a domain name, registrants must, among other things, 1) “represent and warrant” that registering the name “will not infringe upon or otherwise violate the rights of any third party” and 2) agree to have the matter heard as an UDRP proceeding if any third party asserts that the domain name violates its trademark rights.

The UDRP is an administrative procedure. A UDRP limits itself to matters concerning abusive registrations and will not intervene in genuine disputes over trademark rights. To prevail in a UDRP proceeding, the complainant must establish three elements:

The suit was filed by D. Michael Anderson of Barnes & Thornburg LLP. The case was assigned to District Judge Rudy Lozano and Magistrate Judge Christopher A. Nuechterlein in the Northern District of Indiana and assigned Case No. 3:14-cv-00280-RL-CAN.