The U.S.Court of Appeals for the Federal Circuit (“CAFC”) issued its Opinion in the case of Curver Luxembourg, SARL (“Curver”) versus Home Expressions Inc., (“Home Expressions”) to construe claim language of a design patent to limit the scope of the claimed design. Curver, the Plaintiff-Appellant in this case, is the assignee of 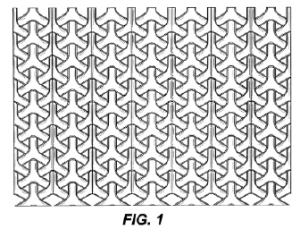 United States Design Patent No. D677,946 (the “‘946 Patent”) for “Pattern for a Chair” that claims “an ornamental design pattern for a chair.” While the ‘946 Patent claims the pattern for the chair, the figures for the design patent are disembodied from any article of manufacture. Curver instituted litigation against Home Expressions alleging that it made and sold baskets that incorporated Curver’s patented design and were thus infringing the ‘946 Patent. The District Court found in favor of Home Expressions as it found the ‘946 Patent was limited to chairs only. Curver then appealed to the CAFC which affirmed the District Court’s decision that the claim language limited the scope of the claimed design to apply to chairs only.

Curver filed for the ‘946 Patent in 2011 with the original title “patent directed to a pattern for furniture.” During prosecution, the examiner objected to many things including the title because under 37 C.F.R. § 1.153, a design patent’s title must designate a “particular article” for the design. Curver allegedly accepted the examiner’s suggestion to direct its pattern to be used for a chair and amended its application accordingly without amending the attached figures.

Home Expressions allegedly makes and sells baskets that have a similar Y-shape to Curver’s ‘946 Patent. Because of this, Curver filed a complaint against Home Expressions alleging its baskets infringed the ‘946 Patent. Pursuant to FRCP Rule 12(b)(6), Home Expressions filed a Motion to Dismiss Curver’s Complaint for failing to plead a plausible claim of infringement, which was granted by the district court. As part of a two-step analysis, the District Court first construed the scope of the ‘946 Patent to be limited to a design pattern for a chair. For part two of the analysis, “the district court found that an ordinary observer would not purchase Home Expression’s basket with the ornamental “Y” design believing that the purchase was for an ornamental “Y” design applied to a chair, as protected by the ‘946 patent.” As such, Curver’s Complaint was dismissed.

The CAFC reviewed the District Court’s opinion de novo, meaning the CAFC examined the evidence and ruled on the law without giving deference to the District Court’s opinion. This was a case of first impression for the CAFC. Typically, courts focus on the illustrated figures to define the scope of a design patent, however, the drawings in this case failed to show an article of manufacture for the ornamental design. The CAFC noted, “[f]or over one hundred years, the Patent Office has made clear that it does not grant patents for designs disembodied from an article of manufacture.” The CAFC quoted Sarah Burstein who wrote, “[l]imiting the scope of a design patent based on disclosed articles of manufacture also promotes the administrability of the examination process by imposing practicable limits on prior art searching, which would otherwise be unduly time-consuming.” The Patented Design, 83 Tenn. L. Rev. 161, 212 (2015). While Curver further argued the district court misapplied prosecution estoppel, the CAFC found it was proper as Curver amended the application to fit within the requirements of §1.153. Therefore, the CAFC affirmed the decision of the District Court.