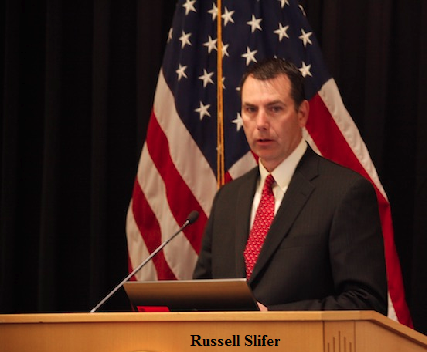 On Wednesday, U.S. Secretary of Commerce Penny Pritzker announced the appointment of Russell Slifer as the next Deputy Under Secretary of Commerce for Intellectual Property and Deputy Director of the U.S. Patent and Trademark Office (“USPTO”). Slifer left his role as the Director of the USPTO’s Rocky Mountain Regional Office in Denver. He began his new duties at USPTO headquarters in Alexandria, VA, on the day of the announcement.

While Director of the USPTO’s Denver office, which opened on June 30, 2014, Slifer served as the agency’s primary liaison with the innovation community in the Rocky Mountain Region. He was actively engaged in education and outreach initiatives, empowering the USPTO to develop programs, policies, and procedures to meet the needs of the Rocky Mountain West innovation community.

“Russell has an impressive track record of success across several disciplines and will be a tremendous asset to the USPTO,” said Secretary Pritzker. “His leadership will be instrumental in the USPTO’s efforts to foster economic growth and promote American innovation by reducing the patent application backlog and enhancing patent and trademark quality. I look forward to working with Russell in his new role, along with Director Lee and the rest of the USPTO team.”

Slifer has practiced intellectual property law for the last 20 years. Prior to serving as Regional Director for the USPTO’s Rocky Mountain Regional Office, he spent eight years as Chief Patent Counsel for Micron Technology in Boise, Idaho. He also was a design engineer for Honeywell and spent more than nine years in private practice in Minnesota helping a wide variety of clients, including individual inventors, universities, and Fortune 100 companies, build patent portfolios to protect their innovations.

“Russ has proven tremendously successful at launching the USPTO’s Rocky Mountain regional operations and building a solid foundation from which that office is primed to continue serving the unique needs of the regional innovation community,” said Under Secretary for Commerce for Intellectual Property and Director of the USPTO Michelle K. Lee. “And I look forward to working more directly with Russ now at headquarters to improve operations across the USPTO and make the agency more responsive to the needs of the American innovators.”

“It has been my privilege to serve as the Director of the Rocky Mountain Regional Office and I look forward to bringing that area’s unique perspective to the USPTO,” said Deputy Under Secretary of Commerce for Intellectual Property and Deputy Director of the USPTO Russell Slifer.

Serving alongside Under Secretary for Intellectual Property and USPTO Director Michelle K. Lee, Slifer will take charge of an office that encourages innovation and technological advancement, and helps businesses protect their investments, promote their goods and safeguard against deception in the marketplace.

The USPTO plans to name an interim director soon, and will work swiftly to appoint a new director for the Denver office to continue the strong education and outreach initiatives and public engagement programs tailored to the Rocky Mountain West’s unique ecosystem of industries and stakeholders.