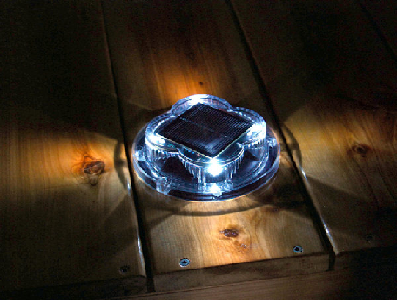 Lake Lite is in the business of designing and selling dock lights and other related products and accessories in the boating/dock industry. Its product line includes solar-related dock lights.

In April 2012, Lake Lite first began to offer a “Solar Dot” line of products. Lake Lite indicates that UFP inquired about collaborating with Lake Lite to offer the Solar Dot products to UFP’s customers and that, in November 2012, a mutual non-disclosure agreement was entered so that confidential information regarding Lake Lite’s Solar Dot products could be disclosed and the potential collaboration evaluated. The disclosed information included Lake Lite’s copyright applications to now-copyrighted materials, registered as U.S. Copyright Nos. VAu001118627 and VAu001156962.

Lake Lite asserts that, during these negotiations, it made numerous modifications requested by UFP for which it was not compensated. Lake Lite and UFP failed to reach an agreement about licensing terms and discontinued negotiations. Instead, Lake Lite asserts, UFP has now wrongfully begun offering its own “Solar Deck and Dock Lights.”

In this Indiana copyright and patent litigation, Plaintiff Lake Lite’s specific complaints include that Defendants have been unjustly enriched as a result of their manufacture, importing, marketing and sale of their solar deck and dock light products. Lake Lite contends that Defendants’ acts include infringement of Lake Lite’s copyrights and patents, unauthorized use and misappropriation of Lake Lite’s confidential information and trade secrets and violation of the mutual non-disclosure agreement between Lake Lite and UCP.

The complaint, filed by a copyright and patent lawyer for Lake Lite, alleges the following:

information, including a formula, pattern, compilation, program, device, method, technique, or process, that:

1. derives independent economic value, actual or potential, from not being generally known to, and not being readily ascertainable by proper means by, other persons who can obtain economic value from its disclosure or use; and

2. is the subject of efforts that are reasonable under the circumstances to maintain its secrecy.

The four general characteristics of a trade secret are:

3. that is not generally known, or readily ascertainable by proper means by others who can obtain economic value from its disclosure or use; and

4. that is the subject of efforts, reasonable under the circumstances, to maintain its secrecy.

The suit was filed by M. Scott McIntyre of Baker Hostetler LLP. The case was assigned to Judge Jon E. DeGuilio and Magistrate Judge Roger B. Cosbey in the Northern District of Indiana and assigned Case No. 1:14-cv-00337-JD-RBC.